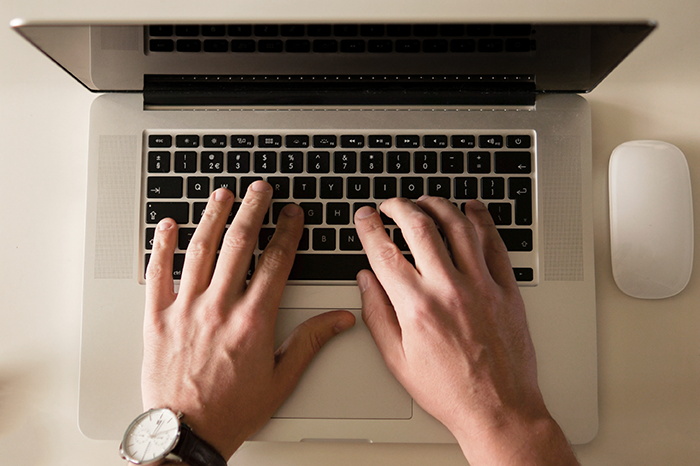 An online study with 168,000 people shows large variation in typing speeds and styles.

The dataset is the largest ever on everyday typing and exposed several factors that differentiate fast vs. slow typists. In addition to making less errors, the researchers found that fastest typists rely on so-called "rollover" where a letter key is typed already before the previous one is released. The data is published and free to use for research purposes.

The test was taken by people from over 200 countries of whom 68% were from the US.

Researchers from Aalto University in Finland and University of Cambridge in the United Kingdom have collected extensive data about the typing behavior of 168,000 volunteers. The researchers developed an online typing test following scientific standards and published it on the free typing speed assessment website typingmaster.com. Users transcribed sentences voluntarily after giving their informed consent that their anonymized data would be collected and used for research purposes.The test was taken by people from over 200 countries of whom 68% were from the US. Most were younger and interested in typing, with over 70% having taken a touch typing class.

"Ethical large-scale crowdsourcing experiments that allow us to analyse how people interact with computers on a large scale are instrumental for identifying solution principles for the design of next-generation user interfaces," says Dr Per Ola Kristensson, University Reader (Associate Professor) in Interactive Systems Engineering at the University of Cambridge.

The data sheds new light on present-day typing performance. Not surprisingly, the data confirmed faster typists generally make less mistakes. â€œCorrect motor execution is the key to fast typing. Slower typists make more errors and require a long time to identify and correct them. This is particularly detrimental for their performance.â€ says Anna Feit, a doctoral student at Aalto University.

However, the study also discovered a new practice in fast typing called rollover typing, which is well-known among pro gamers but has not been observed during everyday typing. Here, the next key is pressed down before the previous finger has lifted up. This strategy was surprisingly prevalent, with fast users typing 40-70% of keystrokes using rollover, irrespective of whether they touch type or not. â€œThis strategy is only possible for highly practiced letter combinations and when performance does not rely on visual attention,â€ says Anna Feit. â€œAn important goal for typing is to learn not to look at fingers.â€

The results of the study change our understanding of typing performance. Most of our knowledge of how people type is based on studies from the typewriter era. People presently make different types of mistakes: more errors where a letter is replaced by another one, whereas in the typewriter era they often added characters or omitted one. Also, modern users use their hands differently. Anna Feit explains: â€œModern keyboards allow typing keys with different fingers of the same hand with much less force than what was possible with typewriters. This is partially explaining why self-taught typing techniques using less than ten fingers can be as fast as the touch typing system, which was probably not the case in the typewriter era.â€

The large dataset allows to infer reliable statistics about the typing performance of modern computer users. Average users in this study typed 52 words per minute, much less than the professionally trained typists studied in the 70’s and 80’s who typically reached 60-90 words per minute. However, performance varied largely. â€œThe fastest users in our study typed 120 words per minute, which is amazing given that this is a controlled study with randomized phrases,â€ tells Prof. Antti Oulasvirta. â€œMany informal tests allow users to practice the sentences, allowing unrealistically high performance.â€ 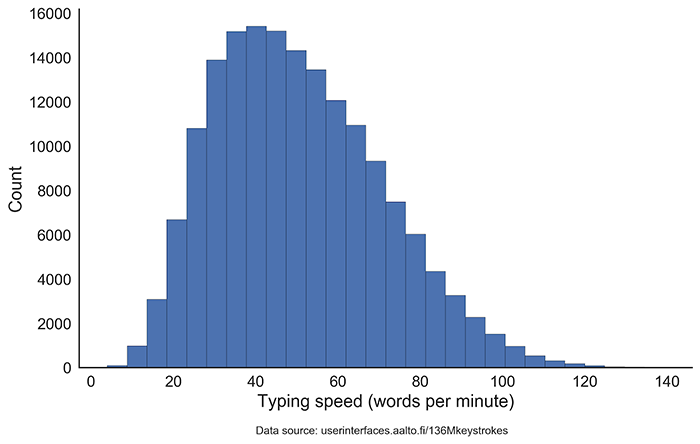 The typing test showed that the majority of computer users type around 30-60 words per minute but some reach over 120.

Users who took the typing test also provided their demographic information and answered questions about their typing experience. It was found that users who took a typing course in the past actually showed a very similar typing behavior as those who never took such a course, how fast they type, how they use their hands and the errors they make – even though they use less fingers. This is in line with previous research suggesting that users on the one hand develop their own efficient techniques and on the other forget the â€œpureâ€ touch typing system.

Analyzing the individual keypresses, the researchers found that users exhibit different typing styles, characterized by how they use their hands and fingers, the use of rollover, tapping speeds, and typing accuracy. For example, they could classify some users as â€˜â€™careless typistsâ€™â€™ who move fingers quickly but have to correct many mistakes, and others as attentive error-free typists, who gain speed by moving hands and fingers in parallel, pressing the next key already before the first one is released. It is now possible for a computer to classify users’ typing behavior simply based on the observed keystroke timings which does not require to store the text that users have typed. Such information can be useful for example for spell checkers, or to create new personalised training programmes for typing.

Anna Feit says: "You do not need to change to the touch typing system if you want to learn to type faster. A few simple exercises can help you to improve your own typing technique". She suggests the following practices:

o   Pay attention to errors, as errors are costly to correct. Slow down to avoid them and you will be faster in the long run.

o   Learn to type without looking at fingers; your motor system will automatically pick up very fast â€˜â€™trillsâ€™â€™ for frequently occurring letter combinations (â€œtheâ€), which will speed up your typing tremendously. Being able to look at the screen while typing also allows you to quickly detect mistakes.

o   Practice rollover: use different fingers for successive letter keys instead of moving a single finger from one key to another. Then, when typing a letter with one finger, press already the next one with the other finger.

o   Take an online typing test occasionally to track performance and to identify weaknesses such as high error rates. Make sure that the test requires you to type new sentences so you do not overpractice the same text. Our scientific typing test gives you a reliable estimate of your typing performance.

o   Dedicate time to practice deliberately. People may forget the good habits and relapse to detrimental ways of typing.

The study will be presented at the worldâ€™s largest computer-human interaction conference, CHI, at Montreal, Canada, USA, in April 2018, where it was recognized to be among the top 5% of publications. The study was done in collaboration with TypingMaster.com.

The anonymized dataset is available at the project homepage https://userinterfaces.aalto.fi/136Mkeystrokes/

The scientific typing test used to collect the data can be taken under the following link http://typingmaster.research.netlab.hut.fi/