Computers learn to understand humans better by modelling them

Computers are able to learn to explain the behavior of individuals by tracking their glances and movements.

Researchers from Aalto University, University of Birmingham and University of Oslo present results paving the way for computers to learn psychologically plausible models of individuals simply by observing them. In newly published conference article, the researchers showed that just by observing how long a user takes to click menu items, one can infer a model that reproduces similar behavior and accurately estimates some characteristics of that user’s visual system, such as fixation durations.

Despite significant breakthroughs in artificial intelligence, it has been notoriously hard for computers to understand why a user behaves the way she does. Cognitive models that describe individual capabilities, as well as goals, can much better explain and hence be able to predict individual behavior also in new circumstances. However, learning these models from the practically available indirect data has been out of reach.

“The benefit of our approach is that much smaller amount of data is needed than for ‘black box’ methods. Previous methods for performing this type of tuning have either required extensive manual labor, or a large amount of very accurate observation data, which has limited the applicability of these models until now”, Doctoral student Antti KangasrÃ¤Ã¤siÃ¶ from Aalto University explains.

The method is based on Approximate Bayesian Computation (ABC), which is a machine learning method that has been developed to infer very complex models from observations, with uses in climate sciences and epidemiology among others. It paves the way for automatic inference of complex models of human behavior from naturalistic observations. This could be useful in human-robot interaction, or in assessing individual capabilities automatically, for example detecting symptoms of cognitive decline.

“We will be able to infer a model of a person that also simulates how that person learns to act in totally new circumstances,” Professor of Machine Learning at Aalto University Samuel Kaski says.

“We’re excited about the prospects of this work in the field of intelligent user interfaces,” Antti Oulasvirta Professor of User Interfaces from Aalto University says.

“In the future, the computer will be able to understand humans in a somewhat similar manner as humans understand each other. It can then much better predict not only the benefits of a potential change but also its individual costs to an individual, a capability that adaptive interfaces have lacked”, he continues.

The results will be presented at the worldâ€™s largest computer-human interaction conference CHI in Denver, USA, in May 2017. The article is available in preprint: https://arxiv.org/abs/1612.00653
The picture shows how ABC-driven parameters lead to more accurate predictions of user behavior. 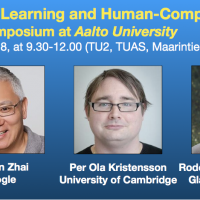