If you are online-shopping, banking, or just fiddling around with your phone, there is a good chance that youâ€™re using a menu system. Menu systems are widely used user interfaces for selecting commands. Too often they are frustrating to use, however, because the right item cannot be found, or because we do not know what commands are available. Computational design could help designers tackle the hard combinatorial problems. Designing a really good menu is a really hard challenge. If a menu has mere 10 commands, there are around 4 million ways to organize that menu within one single tab. So far, no method has been presented that produces well-structured and usable menus within an acceptable time. Previous approaches have been either limited to simple menus (linear menus with no structure) or required a designer to fix issues that remained unsolved in a computer-generated menu. In addition to combinatorial explosion, two problems stand out: (i) lack of adequate mathematical description of the design problem and (ii) a formulation of an evaluative function that tells the optimizer which designs are good for users.

Dr. Niraj Dayama and team has worked on a new idea for model mathematically both the design problem and the way people search for commands in a menu. The new approach renders the problem solvable for a very efficient mathematical optimization method called integer programming. His work entails a precise definition of the menu design problem in terms of ordering and grouping of commands. To formulate the evaluative function, the insight was to build on a theory called the Information Foraging Theory. It minimizes the effort Â of searching for one specific command among a large menu. New to this approach is that it minimizes the time a user is estimated to waste in irrelevant parts of a menu. The produced menus have a hierarchy that is easier for the user to search and make sense of.
The team developed a program that can produce a usable hierarchical menu layout for any application where a list of commands, their access frequencies, and mutual associations can be given. A study with 25 participants showed that the optimized layouts are around 25% faster to use than real commercial baselines (Adobe Reader, Microsoft Notepad, Mozilla Firefox). The manuscript will be submitted for review later this month.

Emotional intelligence in AI and robots 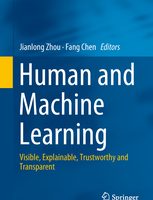